Wisconsin is known for its football and for its cheese. It is, after all, “America’s Dairyland.” But, your life isn’t all about cheese curds. You are dealing with the serious issue of addiction, and that takes the fun out of daily living. It prevents you from enjoying yourself. There was likely a time when substance use was fun and did improve your mood, but now, you have to do it to feel normal. It’s time for that to stop and WI Free Rehabs can make that happen. Using a variety of treatment methods, the professionals caring for you will support you as you take back your life. To connect with Wisconsin free drug and alcohol rehab centers or to have all of your questions answered, call 800-564-3865 (Who Answers?) . You can explore local treatment options by clicking on city names in the list below.

According to the ONDCP, “In 2009-2010, Wisconsin was one of the top ten states for rates of illicit drug dependence or abuse among persons 12-17.” This is extremely problematic for the state, especially because marijuana was the most common substance among primary drug treatment admissions, and those who abuse it early on are the ones most likely to become addicted (NIDA). For example, the number of users who become addicted to marijuana (1 in 11) “increases among those who start as teens (to about 17 percent, or 1 in 6).” 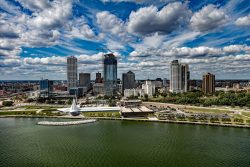 Fortunately, though, Wisconsin’s abuse rates are slowly beginning to dwindle. In 2008, “approximately 9 percent of Wisconsin residents reported past-month use of illicit drugs” while those who reported it in 2010 only account for 7.77 percent of the state’s population (ONDCP). The state is also no longer in the top ten for “past year use of cocaine among persons age 12 and older; past-year use of cocaine among young adults age 18-25; and past-year non-medical use of pain relievers among persons age 12 and older.” However, this does not mean that Wisconsin’s abuse issues are completely gone.

On the contrary, treatment admissions for heroin and other opiates have been on the rise since 2008. These drugs can cause extreme addiction syndromes as well as the potential for fatal overdose. Currently, the state’s overdose rates are below the national average, but there is a possibility that they could rise with the ever-increasing abuse of opioid-based drugs (whether illicit or prescription).

For reasons like this, free rehab facilities exist in the state of Wisconsin. Certain individuals need free treatment because they cannot afford to attend traditional treatment facilities. Even with insurance, most individuals wind up paying some amount out of pocket, and drug abusers often cannot afford this kind of expense. Because their addiction led them to feel that the drug was more important than anything else, they will often have spent all their money on it, leaving them with few funds. Also, many individuals lose their jobs as a result of severe drug abuse because they become apathetic and unconcerned with everything except their next fix.

According to the NIDA, “Treatment enables people to counteract addiction’s powerful disruptive effects on the brain and behavior to regain control of their lives.” And free rehab allows them to receive all these benefits without the extreme costs that patients can sometimes incur. Addiction rehab must be available to and effective in the treatment of all individuals, even those who cannot pay for it or who can only pay small amounts.

Racine, Madison, Appleton, and Green Bay all have facilities where patients can receive free rehab treatment. In these bigger cities, there are often many cases of drug abuse, and individuals need a safe place to go in order to start recovery without the constant threat of relapse. Then, after the person becomes stronger, they can take what they learned back into their life. If you are looking for free or affordable treatment for addiction, choose one of the Wisconsin facilities above and learn more about the possibilities of free rehab in your state.