The unofficial Missouri state nickname, The Show Me State, is a reminder that Missourians are conservative people who are not gullible and require adequate proof before they believe something. You might think that it is this ingrained mindset that has prevented you from acknowledging you have a substance use problem, but it’s a lot more likely to be denial. At this stage, you have seen enough evidence to point to an addiction. But, once you acknowledge it and look for help, you will find it. Missouri free drug and alcohol rehab centers are available to you and they will enable you to reclaim control over your life. Using a variety of methods that includes, medication, therapy, and support groups, these programs allow you to manage your addiction. To learn more about MO Free Rehabs, call 800-564-3865 (Who Answers?) or click a city below and explore.

According to the ONDCP, “Approximately 7.7 percent of Missouri residents reported past-month use of illicit drugs; the national average was 8.82 percent.” Unfortunately, in 2009, “the rate of drug-induced deaths in Missouri was higher than the national average,” climbing from 2007 when the two numbers were only similar. At 881, it was higher than the number of those individuals who died in the state as a result of firearms (822). 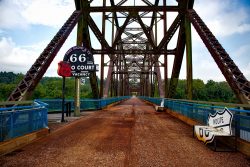 This may mean, although residents of the state are not abusing drugs in numbers as high as those found across the nation, individuals who are doing so are likely not receiving the treatment they need and, therefore, undergoing fatal overdoses all too often.

The ONDCP states, “Data show that marijuana, followed by stimulants (including methamphetamine) and cocaine, is the most commonly cited drug among primary drug treatment admissions in the state.” Heroin is a close third. While marijuana does not usually cause deadly overdose, stimulants can be very dangerous when abused in high doses (causing heart attack and stroke), and heroin can cause severely depressed respiration that often leads to death. Unfortunately, those who attempt to quit abusing drugs like these without some kind of professional treatment often relapse back to their former use. And, because their tolerances become much lower during the time when they tried to quit, they have a higher chance of overdose.

Another reason many Missourians may not attend the treatment they need is because it can often be very expensive. The United States Census Bureau states that the poverty rate of Missouri is just above the national average (15.5% and 15.4%, respectively). The individuals who do not have the type of income to be able to attend more costly treatment centers are often those who need rehab the most, as they may have lost a great deal of their money to their addictions.

All across the state, there are free rehab centers where individuals who would otherwise not be able to afford addiction treatment can start their recoveries the right way. In Jefferson City, Cape Girardeau, and Kansas City, as well as in many other areas, you can receive all the necessary rehab treatments at no cost. These facilities will also ask potential patients to show proof of their financial situations (a low income, a lost job, etc.) in order to ensure that the individuals who truly need free treatment are not forced to wait in order to receive it.

These rehab centers provide all the same treatments that more expensive ones do without asking patients to pay for things they cannot afford like unnecessary amenities or more upscale accommodations. According to the NIDA, “treatment needs to be readily available,” and the free rehab centers below are available to those individuals who need them the most.

Consider attending treatment at one of the facilities listed below by first choosing the one closest to you and calling to ask about the treatment methods they offer and their requirements for patients. Once you find a free Missourian rehab center that meets your needs, you can avoid all the further issues of prolonged drug abuse and start to reclaim your life.