Adopted in 1847, the Iowa state motto is “Our liberties we prize and our rights we will maintain.” You live in Iowa, but do you feel like you have liberty and rights? Or, do you feel like you turned them over to your addiction? It’s still possible for you to reclaim your rights and to maintain them in addiction recovery. Iowa free drug and alcohol rehab centers have the training and experience needed to assist you in managing your addiction and reasserting your liberty. Based on a comprehensive intake evaluation, a treatment plan tailored to your needs will be developed. To learn about the interventions that might be used in your treatment plan, call 800-564-3865 (Who Answers?) and speak to an addiction specialist or click on a local city in the list below.  Let IA Free Rehabs help you control your life once more.

Just because you live in Iowa doesn’t mean that you know very much about addiction throughout the state. And, if you have an addiction of your own, that is likely pulling all of your focus right now. Learning more about rates of drug use in Iowa and the statistics related to rehab center admissions can help you see that your individual problems are part of a bigger pattern.

When you struggle with an addiction to drugs and/or alcohol, it can feel like you are the only person with that problem, and this can make you even more isolated than you already are. While reading this, give yourself space to understand that drug addiction is a disease that affects a number of people. You aren’t alone.

In addition, take in the number of people seeking treatment. It is a sign both that people can be treated and that there are actually a lot of rehab centers in place. Your best chance at achieving and maintaining recovery will come from structured, professional treatment. You can find free rehab centers in cities all across Iowa, including Des Moines, Cedar Rapids, Ankeny, and Sioux City.

If you are interested in connecting with a treatment program that meets the needs of your situation and your location, call 800-564-3865 (Who Answers?) . You can speak to someone who has the answers right now. Don’t spend another day more than you have already feeling like you are fighting this alone. Get help. 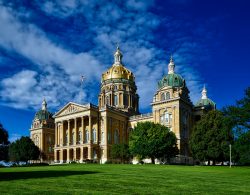 The Substance Abuse and Mental Health Services Administration conducts a survey—National Survey on Drug Use and Health—that delivers national and state level statistics on the use of alcohol, tobacco, illicit drugs (including prescription drugs used nonmedically) and mental health in America. According to the most recent findings, Iowa residents use illicit drugs at a much lower rate than the United States average.

When asked how many of them had used illicit drugs (including marijuana) in the previous month, 4.08 percent of adults responded that they had. That is nearly half of the national average, 8.02 percent.  Moreover, when asked about illicit drugs (not including marijuana) the numbers decreased considerably. Less than 2 percent of Iowa residents reported using in the previous month, compared to a national average of 3.58 percent.

There are a number of factors that contribute to these low numbers. However, in no way do the numbers indicate that Iowa residents simply have stronger willpower than the average American. As drug addiction is a disease, it isn’t a failing of determination.

Because drug use trends indicate less drug use in Iowa than in the United States in general, it should be no surprise that deaths as a direct consequence of substance use should be lower than average as well. In 2007, 211 people in Iowa dies because of drug use. That is less than the number killed by auto accidents (459) and higher than the number killed by firearms (157). The national death rate for drug use is 12.7 deaths per 100,000 citizens. In Iowa, it is 7.1 percent per 100,000.

Treatment has also been shown to help Iowans in recovery to stay out of jail. Information collected in 2003 shows that 90.4 percent of methamphetamine users had not been arrested during the six-month period after they left treatment, and 95.7 percent of those interviewed one year after treatment had not been arrested in the prior six-month period.

Treatment Data The Substance Abuse and Mental Health Services Administration also collects data via a Treatment Episode Data Set. It shows the numbers for people admitted to treatment centers. In 2012, 27, 911 Iowans age 12 and older received drug and alcohol treatment in their state. Records show that 66.8 percent were men and 33.2 percent were women.

Breakdown by Primary Substance at Admission

Your case won’t be the same as all of the other people in treatment, which is why you deserve personalized treatment based on your case and your needs. We can connect you with a rehab center that will do that. Call 800-564-3865 (Who Answers?) now.

Calls to numbers on a specific treatment center listing will be routed to that treatment center. Additional calls will also be forwarded and returned by one of our treatment partners below.

Calls to any general helpline (non-facility specific 1-8XX numbers) for your visit will be answered by ARK Behavioral Health, a paid advertiser on FreeRehabCenter.com.