The Rhode Island state motto is “Hope.” It’s much simpler than other state mottos but equally powerful and relevant. If you are living in Rhode Island and struggling with addiction, you may have lost the hope that symbolizes your state. It is difficult to remain hopeful when addiction breaks every one of the important things in your life, like your job, your family, and your health. However, you need to remember that hope for healing remains, and RI Free Rehabs are something you can count on. These professional programs offer high-end individualized care for every patient, enabling you to build a strong foundation for your continued recovery. It’s time for you to learn more about Rhode Island free drug and alcohol rehab centers by calling 800-564-3865 (Who Answers?) . Or, click on the name of your town in the list below and explore your local treatment options.

According to the ONDCP, “Approximately 13 percent of Rhode Island residents reported past-month use of illicit drugs; the national average was 8 percent.” This is an extremely high number and calls for effective, readily available rehab treatment in the state of Rhode Island. While the state does possess a per capita income rate that is higher than that of the national average, drug abuse and addiction can eventually cause severe financial issues. Therefore, residents of this state need free rehab centers just as much as anywhere else.

Cities like Greenville, Providence, and Newport all have treatment facilities that can help patients who become addicted to some of the most commonly abused drugs in the state. For example, “In 2007-2008, Rhode Island ranked first among all states in a number of drug-use categories among persons age 12 and older”: 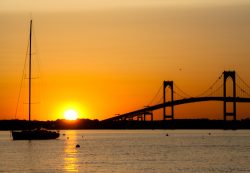 Data taken from a survey in 2010 also show that “heroin is the most commonly cited drug among primary drug treatment admissions in the state, followed by marijuana.” Cocaine is ranked fourth with just under 800 admissions for that year. Even though more people are receiving treatment for heroin and opiate abuse, they are not seeking it in large enough numbers to counteract the extreme drug abuse rates in the state. This is another reason why free treatment is important to Rhode Island.

In the years 2009-2010, Rhode Island was ranked among the top ten states for “past-year non-medical use of pain relievers” as well as marijuana and cocaine (ONDCP). The age range of these statistics inflated as well from 12 and older individuals to also including the highest ranking of anyone between the ages of 18 and 25 who abuses these drugs. The state has an extreme drug abuse issue which has led to many other problems. “In 2009, the rate of drug-induced deaths in Rhode Island was significantly higher than the national average,” 16.0 per 100,000 population to 12.8 per 100,000 respectively.

Free rehab centers allow people who are otherwise unable to pay for treatment to still receive the care necessary to help them stop abusing drugs. Depending on the drug of choice, the length of time the abuse lasted, and the severity of the addiction, this can range from medications to therapy to vocational and housing help. In addition, many of these facilities provide 24-hour care to those patients who truly need it.

Rhode Islanders have seen a steady climb in drug abuse rates over the past few years, which is why it may seem extremely difficult to take the first step and attend treatment. However, it can be the second chance that many individuals are looking for and help patients make life-long changes at no cost that will protect their health, finances, and relationships in the future. The benefits of attending free rehab for addiction are many, which is why these facilities exist. Look for the treatment center closest to you and call the listed number to ask any questions you may have about the facility, its methods, and the many potential ways in which it can be helpful to you.