The Oklahoma state motto is “Labor conquers all things,” which probably sounds like the essence of what people have told you about addiction. Though we now understand that addiction is a disease, there are still people who see it as a personal failing and think you can conquer it with labor or willpower. But, that’s not the case because addiction isn’t a choice; it is a compulsion. That’s why you need help from experts, like those in OK Free Rehabs. These professionals have the experience and the training needed to design and implement a treatment plan tailored to your needs. You can begin your recovery with a solid foundation. If you are ready to learn more about Oklahoma free drug and alcohol rehab centers, please call 800-564-3865 (Who Answers?) and speak with an addiction specialist who can get you into treatment, or click on the name of your city in the list below.

According to the ONDCP, “Approximately 9.66 percent of Oklahoma residents reported past-month use of illicit drugs; the national average was 8.82 percent.” In addition, the state has shown many other issues when it comes to drug abuse and drug control. “In 2009-2010, Oklahoma was one of the top ten states for rates of drug use in several categories, including:” 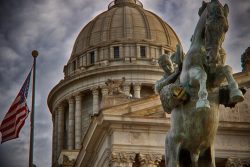 2009’s rate of drug-induced deaths in the state also exceeded the national average, where 766 Oklahoma residents died of a drug overdose. This number is higher than that of individuals who died as a result of motor vehicle accidents or of firearms (736 and 533, respectively).

Rates of stimulant abuse are also rather high in the state, accounting for nearly the same amount of primary drug treatment admissions as marijuana (both hovering around 30 percent of all statewide admissions). This may be because methamphetamine is so widely available in the state and does not show signs of diminishing. “The number of meth lab seizure incidents in the state of Oklahoma increased 440%, from 184 incidents in 2008 to 993 incidents in 2011.” In addition, treatment admissions for opioid abuse (including prescription opioids) are on the rise and currently account for about 15 percent of all admissions.

These figures illustrate a dire need for effective treatment in Oklahoma. Regrettably, the United States Census Bureau places 16.9 percent of the individuals in the state below the poverty level which is higher than the national average. The median household income for individuals living in this state is also nearly $8,000 below the national average. Treatment for addiction can be expensive and, in some cases, can take a rather long time. Fortunately, there are free rehab clinics where patients can receive pharmacological and therapeutic treatments in order to stop abusing drugs.

According to the NIDA, “Research indicates that most addicted individuals need at least 3 months in treatment to significantly reduce or stop their drug use and that the best outcomes occur with longer durations of treatment.” When individuals who do not have the sufficient funds to attend treatment 90 days or more decide to leave early, it puts them in a very unstable condition. With rehab centers like those listed below, patients do not have to worry if they can afford treatment for its entire duration because the cost, if any, is very minimal.

Patients who attend some kind of formal rehab often have stronger recoveries and are able to more effectively avoid the issue of relapse. Treatment centers like these, which are specifically catered to those who would otherwise be unable to afford rehab, are available to all Oklahomans in cities such as Norman, Clinton, Cushing, Bennington, Broken Arrow, and Oklahoma City.

If you have been hoping to attend rehab but were not able to find a facility within your budget, choose one of the cities above and learn about the free rehab centers available to you.