Indiana is the Hoosier State, but there are a lot of theories about why that may be. Most people attribute the term Hoosier to a contractor with that last name who preferred to hire people from Indiana, but no one can be sure. There are also a lot of reasons that people end up with addictions. Even if you feel like your path to addiction was entirely unique, Indiana free drug and alcohol rehab centers will know how to treat you. Every patient is given a thorough intake assessment, which is used to develop a specialized treatment plan. To speak to an expert who can walk you through the treatment options offered at IN Free Rehabs, call 800-564-3865 (Who Answers?) or click on a local city from the list below. Every Hoosier deserves a stable, addiction-free life.

Indiana, like any other state has specific drug addiction issues with differing causes and treatments. If you suffer from a drug addiction, you may feel very isolated. But, you aren’t alone. Indiana has a wealth of rehab options all over the state, in cities such as Bloomington, Fort Wayne, Greenwood, and Anderson that use different approaches and take different forms.

The following discussion will provide data related to drug use and addiction in Indiana, as well as treatment data. At the close of the post, you should feel informed about drug use in the state and possible treatment options. The largest message, however, should be that drug addiction is a serious disease that requires qualified, professional treatment.

If you are grappling with a drug dependency or addiction, it is time for you to speak up and get the help that you deserve. Call 800-564-3865 (Who Answers?) to speak to a counselor who is experienced with addiction treatment. Get your questions answered; get recommendations for rehab centers; and, even discuss funding your treatment.  You don’t need to do this alone anymore. 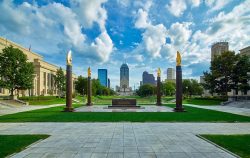 In the most recent National Survey on Drug Use and Health, which provides national and state level information about drug, alcohol, tobacco, illicit drugs, and mental health in America, the rate of illicit drug use in Indiana exceed the national average.

The number of adult Americans who reported using illicit drugs in the previous month was 8.02 percent of the population, while the rate of use among Indiana residents was 8.79 percent. When marijuana was removed from the question, the number of adult Americans using an illicit drug in the past month was 3.58 percent, while the rate of illicit drug (other than marijuana) use among Indiana residents was 4.2 percent. This points to a growing problem with drug use in the state.

Likewise, the rate of drug-related deaths in Indiana also exceeds the national average. In 2007, 827 people in Indiana died as a direct consequence of drug use, less than the number who dies in auto accidents and more than the number who died from firearms. The national rate for drug-induced deaths is 12.7 deaths per 100,000 people. In Indiana, it is only slightly higher, 13 deaths per 100,000 people.

Much like the rest of the United States, alcohol is the most commonly used drug in Indiana. However, rates of heavy drinking are substantially lower in Indiana (5.2 percent) than in the US in general (6.2 percent).

When asked, people 51.6 percent of Indiana residents age 12 and older reported drinking in the past month, and 22.3 percent engaged in binge drinking during that period. In addition, rates of alcohol in Indiana remain highest among young adults between 18 and 25. Therefore it should be no surprise that 60.4 percent of Indiana college students had used alcohol in the previous month.

This certainly has had an impact on health in the state. The yearly rate of alcohol dependence and abuse in Indiana was 7 percent. And, unsurprisingly, the group with the highest rate (14.5 percent) were 18-25 year olds. Because of the popularity of alcohol, the largest numbers of admissions to treatment were alcohol related. Over one-third (40.1 percent) of Indiana residents received alcohol treatment.

However, rates of alcohol dependence differed among treatment population groups:

According to the Treatment Episode Data Set, data collected by the Substance Abuse and Mental Health Services Administration, 24,080 people age 12 and older required drug and alcohol treatment in Indiana. Of those, 63.7 percent were male and 36.3 percent were female.

If you are a person who knows that you need treatment, you don’t have to figure everything out on your own. There are a number of Indiana rehab centers that are appropriate to your situation and budget. Call 800-564-3865 (Who Answers?) and get started today.