With much of the focus on teens, many special populations go unnoticed when the subject of substance abuse comes up. One of these special populations is the U.S. military veterans. Despite a zero tolerance policy instituted by the military, substance abuse is still prevalent among those returning home. When looking at the overall problem of drug abuse among our veterans there are several factors that need to be examined.

Veterans are often victims of substance abuse because of a variety of reasons. These reasons include:

Although the standard reasons still apply, veterans are a particularly vulnerable population due to the strain that a military activity puts on the mind and body.

How Bad is the Problem Really?

According to the White House’s National Office of Drug Control Policy: 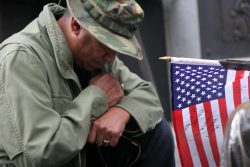 Many veterans are exposed to substances while in a foreign country.

These facts point to a very serious problem among both our current military personnel and veterans alike. It is important to remember that members of the military and veteran communities have barriers to seeking treatment for their substance abuse problem. These barriers include:

Military personnel are taught to hide weakness as a form of combat training, while this practice is excellent in the field and training; it becomes a problem when seeking drug addiction treatment.

What are Commonly Abused Substances in the Military?

According to the National Academies of Sciences, Engineering, and Medicine, substance abuse has been a problem for the military for a long time. Previously the most commonly abused substances were:

Although both alcohol abuse and binge drinking are still a major problem, military personnel are now reporting more prescription drug abuse instead of illegal street drugs.

Where can a Veteran Seek Private Help?

If you are a veteran and need to find treatment that will not compromise your privacy, call 800-564-3865 (Who Answers?) . We can help you find the treatment that you need to overcome your addiction.